A Visit to the Baltic: Latvia & Estonia

The entire coast of these Baltic countries is the land of amber, a fossilized resin. The greatest abundance and probably the best prices for amber can be had in Lithuania. In many shops you see various shades of brown and yellow jewelry, carvings, and other items like chess sets made of amber.

The food in these countries is similar and quite hearty- excellent dark breads, sausages, lots of potatoes, potato pancakes and dumplings, and delicious red beat soup and sauerkraut soup. I miss it!

From Lithuania we continued by car towards Riga, Latvia, arriving around 5 p.m, and checked in at the Hotel Avalon. One side of the building was very old, while the facade facing the old market was very modern, as was the interior. It has a tall atrium lobby, with a glass elevator, and rooms are very modern.

We walked around Riga with a guide. She gave us some historical facts, we stopped at a small “sun” museum, where the owner collects various items made to represent the sun (clocks, mirrors, plates, signs). She even had a small workshop, where guests could paint a small sun to keep as a souvenir. This would appeal to children in particular.

Estonia, located across the water from Finland, has a language similar to Finnish. But the architecture of the country is very Nordic. The old city center of Tallinn is so lovely. We stayed at the small Hotel Savoy Boutique on a side street. It has a nice restaurant with fusion cuisine (Baltic and European), and a cozy lounge, and bar. The staff is very friendly. The building dates from 1898, but was renovated a couple of years ago. Having only 44 rooms, it is very intimate.

We walked over to the opera house for a ballet performance. Super seats right up front. Not many large cities where one can do this. Very stress free.

Estonia is the first country to have E-government!: the first elections to be held on the internet (in 2007)! That save tons of paperwork and really is kind to the environment.

It was interesting to see that these Baltic countries had many outdoor restaurants, and people were still sitting outside, even in chilly weather. The establishments provide you with blankets! And many have heaters.

What is also interesting in these three countries, are the Museums of the Occupation. The emphasis is on the Russian occupation. The one in Tallin, Estonia, is the best of them, both physically and qualitatively. The building has many items that are well preserved (books, radios, cars, uniforms, etc.)

During the Late Middle Ages and early modern period (13th-17th centuries), Riga and Tallinn belonged to the Hanseatic League, an alliance of cities and their guilds that maintained a trade monopoly along the coast of Northern Europe, from the Baltics to the North Sea and inland. The Hanseatic cities had their own law system that furnished their protection and provided mutual aid.

My recent two week adventure to Europe was precipitated by the first LGBTQ PROUD Travel Conference in London. It became... 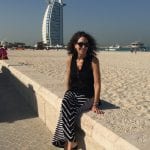 You would think that the girl who hails from the Great Northeast would gravitate to warmer climates. Generally I have....

A popular port of call on Baltic cruises, Tallinn is one port that many U.S. visitors visit and exclaim: “I...