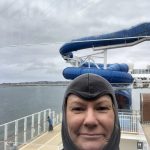 Peggy Tsunoda
#Austria#Danube River#Holiday Travel#Viking Cruises
Lovely Budapest is the capital of Hungary and has two distinct sides separated by the Danube River. Buda is on the west side of the river, is hilly, and has narrow, winding streets. If you travel to that side of the river, make sure you see Fisherman’s Bastion and the Matthias Church. On the east is Pest, the urban side of the city. The dynamic Pest side houses the parliament building, trendy restaurants, riverside promenades, flea markets and coffee houses.


When we arrived in Budapest, the Christmas Market was in full swing. It was cold (upper 30’s F) and we had our winter jackets on. To warm us up, my husband and I tried the traditional Hungarian “mulled wine” which was like a hot Sangria mixed with cloves and additional spices.

One of the more traditional things to eat at the Budapest Christmas Market is the “Chimney Cake”. The cake is piping hot and smokes like a chimney once you receive it. Other items of interest included: Hungarian flatbread pizzas, pork knuckle and Hungarian sausages.

On the perimeter of the Market, there are a lot of craft vendors and food that hasn’t been immediately prepared (e.g., baked goods, cheese, jerky). An abundance of vendors that typically attend craft fairs are also available to sell winter hats, scarfs, socks and children’s toys.
After spending two days in Budapest, we boarded the Viking Baldur, for the start of our European river cruise. The Viking Baldur is one of Viking River Cruises‘ “Longships”: with staterooms and 443 feet in length. We enjoyed our French Balcony stateroom that was located on the same deck as the restaurant, making it very easy to get to the dining room for some outstanding meals.
Our first stop on the river cruise was Vienna, Austria. In the morning, I took the complimentary three-hour Vienna city walking tour, led by a very informative and knowledgeable guide who took us into the courtyard of the Hofburg Palace, which is the residence and offices of the President of Austria. We continued to the city center, past many shops, malls and coffee houses. The tour concluded outside of St. Stephens Cathedral, where we could enter at our leisure and take other optional tours of the church. This is the church where Hayden sang as a choir boy and Mozart was married in 1782.
The next stop was Melk, Austria. For me, as for many, one of the highlights of this trip is the Abbey in Melk.
The Abbey was built in the early 1700’s. It managed to quickly gain fame due to its large collection of frescoes and an immense library containing many ancient manuscripts and scrolls.Today, monks run the Abbey and take care of its upkeep. A school servicing nine hundred local schoolchildren is also run out of the Abbey.
Like Melk, Passau is also a small town. Overnight, we went through more river locks and passed the border to Germany. Because Passau is bordered by three rivers, it is highly susceptible to flooding. There were signs on many of the old buildings indicating the date and high water marks of the river. In many cases, the river crested at the second or third level of the buildings.We stopped by a local bakery – Cafe Simon. There, we were introduced to the art of making gingerbread. This bakery/restaurant has been owned and operated by the same family for four generations. During the tour, we were treated to a gingerbread making demonstration by two generations of Simon’s and were given three different samples of various types of gingerbread.

The next morning, we docked in Regensburg, Germany. Regensburg is the largest medieval town north of the Alps with over 1,000 historic buildings. Its most famous sights include the oldest continuously open public restaurant in the world, the historic Wurstkuchl, or Old Sausage Kitchen. We enjoyed the tangy flavor of the sausages, especially when eaten on the fresh baked rolls and accompanied by the homemade spicy mustard.

We visited Händlmaier’s, that exclusively sold Bavarian mustard: regular, sweet or hot. The mustard was also sold in tubes which made this extremely easy to pack in our suitcases!

In Nuremberg, Germany, we took the complimentary tour of the Nazi party parade grounds at the location where Adolf Hitler gave many of his speeches. The Nazi rally grounds is an approximate 6 square mile area in southeast Nuremberg.

Nuremberg Castle was the next stop on the tour. The top of the castle provided great views of the city.

At the end of our cruise, we disembarked the ship and took the three-hour coach ride to Prague by private minivan. Prague was the perfect city in which to end our vacation, as the Holiday markets here go on until the beginning of the new year. We also enjoyed touring the city and all its castles, and were lucky enough to see a 10-piece orchestra perform classical music in the chambers of the historic St. Nicholas Church, which was built in the Old Town Square in 1735.


Overall, I would say that the Viking Cruises offered a great way to experience Europe like a local.

Unlike some of the large ocean cruise vessels, debarking from the ship was extremely simple and we walked directly into the center of each town quickly. The crew aboard the Baldur was first-rate. We enjoyed the many themed dinners and a sing-along with the crew. Local beers and excellent local wines were offered with lunch and dinner, making the cruise even more festive and relaxing. As is typical of European river cruises, shore excursions are included in the cruise price, as is wine and beer with lunch and dinner. 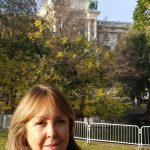