And the Mirror Ball Trophy Goes To….. 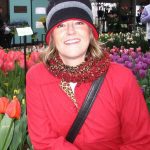 Glamour. Enchantment. Thrilling dancing. Holland America has partnered with Dancing with the Stars and offers complimentary dance classes based on dance routines from the ABC smash hit show on most of their cruises. In addition, six specific themed cruises feature Dancing with the Stars’ celebrities and famed dance professionals.

Guests can enjoy a chance to meet the dancers, ask questions and take photos, attend a beautiful fashion show and see a dazzling production starring the celebrities and dance professionals. We thought it would be a fun to promote the final “Champions Cruise” to the Eastern Caribbean for December 2014. 35 of our RC TravelClub members joined us on this fantastic cruise.

The Cruise Champion with the highest score from each of Holland America’s 15 ships were invited, on a complimentary basis, to compete on this final cruise of the season. The 15 finalists danced to compete for the coveted Mirror Ball trophy and the title “Holland America Line Dancing with the Star: At Sea Grand Champion. And so the competition began. The competitors performed on 4 different occasions and danced the waltz, salsa, jive and dance of choice. The judges were Kym Johnson, Artem Chigvintsev, Sharna Burgess and Sabrina Bryan. The final competition of the last three dancers was on the last evening of the cruise. The showroom was a packed house and by applause we voted for a young man from Canada who was truly a crowd favorite.

The fashion show hosted by Kym Johnson and Carson Kressley was spectacular. We were able to get up close to some the most beautiful costumes from seasons past. In addition to all the onboard events, we spent the day at Holland’s private island, Half Moon Cay. The color of the water is the most beautiful color of turquoise we had ever seen. A barbeque lunch was cooked on land by the ship’s crew and the aroma of the delicious food called us from our beach chairs.

The ship docked in St.Thomas and we headed straight to Megan’s Bay, one of the top 10 most beautiful beaches in the world and it did not disappoint. The weather couldn’t have been more beautiful and the water was crystal clear.

The ship docked in St.Thomas and we headed straight to Megan’s Bay, one of the top 10 most beautiful beaches in the world and it did not disappoint. The weather couldn’t have been more beautiful and the water was crystal clear.

We spent a half a day in historical San Juan and enjoyed the culture and fantastic forts. Everything was fairly close to the pier and we walked most of the day, but you could also take a quick taxi ride to the main shopping areas.

Our last port was Grand Turk. This is a stunningly beautiful paradise, although a very flat island. There was plenty of shopping, beach activities and of course the infamous Margaritaville where we found a few of group members hanging out.

We are looking at planning another Dancing with the Stars: at Sea cruise group for 2015… so stay tuned.

Contact our team of experts to begin planning your group travel tours today! Written by Wendy Carlson and Sheree Carpentier

I just got back from an amazing week in the Caribbean! It was full of relaxation and adventure. I got...

Travel insurance varies country to country, but more and more countries are mandating it. Most Schengen nations, Cuba, Russia, the...