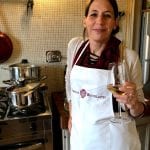 Ireland has been a “bucket list” destination for me since I was a child. My father’s family were Scots-Irish, so like many other Americans I was pulled toward my Irish ancestry.

The biggest surprise of the trip was the food. I hadn’t thought of Ireland as a place with amazing dining. Was I wrong! In the last few years, most of the restaurants have changed to using locally sourced ingredients. Everything was fresh and delicious. Offerings ranged from fresh fish to beautifully prepared beef with soups, salads, Irish breads and decadent desserts. No corn beef and cabbage to be found!

I especially enjoyed driving the country roads and seeing the rolling hills, farmland, cow, sheep, horses and ruins of old castles. I had the feeling of being in a storybook or a movie. The air was clean, crisp and sometimes a little damp. Coming from sunny and dry Southern California I welcomed it!

We travelled with a tour guide and a driver for the week. Our guide Dee was a Blue Badge guide from Belfast and our driver Kiernan was from Dublin. The constant banter was so friendly and hysterical, with each having a distinct accent and slang. By the end of the first day I felt as though we were all longtime friends. Most important thing I learned: Leprechauns don’t exist but Faeries are alive and well in Ireland. The famed faerie trees (bushes) are sacred and have been known to stop construction of motorways, or at least a re-routing!

I was quite surprised to learn that along the Wild Atlantic Way you also find world class surfing. When I saw the surfers out in the stormy Atlantic Ocean without wetsuits, my first thought was: “They must be freezing.” Then I met some surfers from the US, one from Kauai and the other from Oakland. They told me the water temperature is very similar to Northern California.

My flight landed in Dublin but we didn’t stay there. We drove to Belfast in Northern Ireland. Images of the IRA dominated my thoughts. However, Belfast has put “The Troubles” behind it and emerged a very cosmopolitan city. I visited the new Titanic Museum and was impressed by the artifacts and information. It’s definitely worth a visit to the old dockyards and the original tender boat, the S.S. Nomadic, right across from the Titanic Exhibit.

I stayed just outside of the city at the Culloden, which feels like a country manor house. My junior suite and bathroom were huge! The tub was absolutely amazing. My first evening I went to the Gin Experience. The mixologist created a lovely gin with ginger root and other additions. Served chilled from a teapot into beautiful tea cups. It was like afternoon tea with a kick!

Making our way to Derry, we drove on the Giants Causeway route. Along the coast from Belfast, on a clear or semi-clear day, you can see Scotland 12 miles away. In this part of Ireland, called Ulster, is where the Scots-Irish or the Ulster Scots came from. When the Scots-Irish immigrated to the US, they mostly settled in the Appalachian Mountains. Our American blue-grass and country music have roots in Ireland and the Ulster-Scots!

We stopped along the way at the fantastically weird Giants Causeway. Our guide said there are two versions of how it was created: the scientific explanation and the truth! Science says it was caused by a volcanic explosion that left a formation that looks like steps of stone along the coast. The “truth” is that the columns are the remains of a causeway built by the giant Finn MacCool, so he could walk across to Scotland and fight another giant. Of course the story is much more involved, but you need to hear an Irish person tell it!

Then we arrived at the walled city of Londonderry, also known as Derry. Legenderry. Derry was the city that saw the most destruction and violence during “The Troubles.” From the late-’60s to the mid-’90s, this city was deep in the conflict. Today it is a quaint walled village at its core and a sprawling city just outside the walls. I took a walking tour and was enlightened by my tour guide Martin, who has lived in Derry his entire life. His emotional connection to what occurred brought everything to life. The Peace Bridge is a stunning testament to everything that has been accomplished in the last 20 years, bridging the two sides and starting the healing!

On our way to Galway we stopped in Sligo and some pretty amazing sites. This is the part of the country that WB Yeats came from. We saw the cabin he stayed in as a boy, Lissadell House, where Yeats and the Gore-Booth sisters spent holidays. If you are a Yeats fan you should see Sligo, as this is where he found inspiration for many of his poems.

For history or archeology buffs, Sligo offers many megaliths, including Carrowmore, one of Ireland’s largest prehistoric tomb complexes. Along the coast of Sligo there are tons of shell middens dating back to 3,000 B.C. We had a nature walk and talk with a marine archeologist who told us all about the findings around Sligo. There is also a very nice day hike to the Faerie Queen Maeve’s cairn at the top of Knocknarea.

We overnighted at the G Hotel in Galway. Wow! What an amazingly modern and super cool hotel. It has pink neon lights, purple couches, low slung seating and a gorgeous white reception room with glass bubbles hanging from the ceiling. The design director of the hotel was world renowned designer Philip Treacy. The rooms are very sleek, with clean lines.

The big treat here was the Castle! I stayed at Dromoland Castle in County Clare. When we arrived the sun was just rising, and what a sight it was. This princess finally arrived at her castle! The original structure was built in the 15th or early 16th century, and the present building was built in the 1800s.

After a day rambling around the grounds and walled garden, I was ready to explore the countryside.

Still following the Wild Atlantic Way, I went to the Cliffs of Moher. You can see them by boat or hike the top of the cliffs. We chose to hike along the top and see the beautiful panorama. During my Ireland adventure I keep being awed by the spectacular natural beauty of this small island!

Next stop on the way back to Dublin was Ballyfin. Upon arrival at the manor house, we were greeted by the staff lined up in the driveway just like Downton Abbey! The Manor House is set on 614 acres. It has a lake, rock grotto, walled garden, rose garden, rock garden, church and, of course, a tower that any self-respecting grand house should have. The estate was turned into a Franciscan boy’s school in the early 20th century. In 2011, after much restoration, it was opened as a hotel with 15 rooms. Currently they are transforming unused space into additional guest rooms and will soon have 20 rooms. Some of the highlights of this unique property are the china room, where china tea sets are displayed, the wine cellar, spa, indoor pool, and the period costumes from the 1800’s from the Chicago Opera House. Guests are encouraged to dress in period costume for dinner! Ballyfin can be rented out in its entirety for a party or wedding. I definitely had visions of playing Lady of the Manor at this phenomenal estate.

Then on to Dublin! I love saving the iconic cities for my last stop. We went to a cute museum called “The Little Museum of Dublin.”

Everything in the museum had been donated by Dubliners. Such incredible history and artifacts from the 1800s to present day. Had a lovely lunch at the Merrion Hotel. Then headed to Grafton Street to do a little shopping. I love that there are still outdoor flower sellers on this pedestrian shopping street.

I stayed at the Shelbourne, located next to great restaurants, pubs and shopping. My room was very large with a nice bathroom, with a separate soaking tub and shower. After dinner we headed to O’Donahue’s Pub, less than a block from the hotel. This pub is known for its music, and we were not disappointed: there were 10 musicians playing various instruments including traditional Irish ones! With the entire pub joining their voices to some of the traditional songs, my trip ended on a high note! I look forward to my next trip to this magical island!

For more insights about Europe vacations and traveling in Ireland, contact Tanya Bryant.

Ireland is a great destination to visit on a group tour. Some people are skeptical of a group tour and... 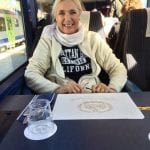 I made a trip to Ireland to re-familiarize myself with one of my favorite destinations and the services of one...

Pairing Dublin and London means you get the best of two entirely different city experiences within an easy flight of...