66 Degrees Latitude, 33 Minutes South is the geographic measurement for the current Antarctic Circle. Even most Antarctica visitors never make it that far South. As a serious traveler, Antarctica had to be part of my lifetime experience.

Beyond being one of the few to ever cross the Antarctic Circle, the two-week expedition cruise in February to my seventh continent was mind blowing on so many levels. That initial motivation to go there turned into one of the most fascinating, emotional and fulfilling adventures of my life. I felt at times I was headed for a new planet and in some ways it seemed to be true.

The long United flights from LAX to Buenos Aires were the start of my journey. A two night stop over in the warm Argentinian capital seemed at odds with what was to come. Then a 3 1/2-hour charter flight to Ushuaia began to set the mood. An adventure way station for land and sea treks to Patagonia and Antarctic Polar sea expeditions, the town center was full of energy.

When the Quark Expeditions Ocean Endeavor was spotted at the pier, the anticipation built knowing we would soon be on our way.

The five-hour sail out of the Beagle Channel was calm. Then came two days crossing the infamous Drake Passage that fulfilled its storied rough and tumble reputation. I for one have never suffered from sea sickness. That streak remains unbroken.

What was new was the need to secure all loose cabin objects. Charger cords, remote controls, suitcases, and books all ended up in different places the next morning. My body was trying to do the same thing in bed. Going about the ship meant learning a new way of walking, trying to anticipate the wave motions.

Outside, the temperature was getting colder by the hour. This was a voyage to the unknown in the truest sense.

The Ocean Endeavor is a very comfortable, if not luxurious, 199-passenger expedition ship. All was done to make us as comfortable as possible. Built in the 1980’s as a ferry in Poland, you always felt its strength but not so much of glamour. It has been adapted several times. I also liked its feeling of spaciousness.

The food was tasty and impressive in its variety, though not quite gourmet. Service was consistently high and the ship had a wide range of accommodations. The mostly young and energetic Quark Expeditions staff kept us busy. A host of daily lectures and briefings on Antarctica added depth to what we could expect.

Our voyage was with a surprisingly large cross section of travelers. Some indeed were older and doing Antarctica towards the end of their travel years. Others were young and planned the trip around hostel stays. Many were traveling on their own to fulfill personal objectives. The environmental group, 2041, had a large representation on board.

A mention needs to be made regarding connectivity. There wasn’t much of it. In a place so isolated, it was expensive, slow and not always reliable. A majority of passengers elected to go dark. There was a pretty robust Intranet so we were kept up to date regarding changes in our daily schedules. Also there were world news recaps for those who were interested.

Adding to the drama was the uncertainty of our itinerary. In expedition cruising, Zodiac landings are always subject to weather and tide conditions. On Day 3, we were given the possibilities for our first exciting steps on land.

Late in the afternoon, we spotted our first massive iceberg. We knew the most exciting part of our Antarctica adventure was just beginning.

Is Hybrid Expedition Cruising for You: A Look at Hurtigruten’s Roald Amundsen

We live in an age of fads; many become part of our culture. The new “fad” in cruise travel is...

A good photo of us in Svalbard on our Quark Expedition bucket list trip to see polar bears on an... 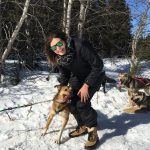 It may seem insane, but the first time I put on a pair of skis was on the continent of...