In The Land of the Polar Bears, Lindblad Expeditions Arctic Cruise

TravelStore
#Alaska#Lindblad Expeditions
Everyone is an explorer at heart! Svalbard is an entirely atypical refuge in the high Arctic that abounds with an extraordinary array of wildlife. Few places in the circumpolar region can match the bio density of Svalbard, and polar bears thrive there. That’s why I embarked on the Arctic cruise on Lindblad Expeditions’ National Geographic Explorer, an ice-class vessel that allows us to probe the seas searching for resident wildlife, including walruses, seals, and the majestic polar bear – the very symbol of the Arctic.

I discovered the unusual Arctic flora and tidewater glaciers on walks with naturalists, and I spotted huge walruses, bearded and ringed seals, Arctic foxes and reindeer. I experienced the legendary midnight sun: the ethereal light of the northern summer. It was not easy to adjust to the sun never setting.
Thank goodness for blackout drapes!Land of the Polar Bears is a voyage undertaken in the spirit of discovery and is exploratory by design, in a region ruled not by humans but by polar bears.
Nature was our guide.

Aboard National Geographic Explorer, we probed the ice in search of wildlife; our exact day-to-day itinerary remained flexible, depending on local ice and weather conditions. Zodiacs and kayaks took us closer to experience the region’s geologic features, wildlife and wildflowers that flourish during the summer months.

The liken was blooming on the rocks in vibrant shades of orange, pink and purple, an amazing contrast to the grey and white Arctic.

Every day the National Geographic photographer and a seasoned naturalist staff were with me us as I ventured to the foot of stunning tidewater glaciers, kayaked among sparkling icebergs, and explored fjords that split the rugged coastlines.

Svalbard is one of the best places on the planet to observe majestic polar bears in their natural environment. As we began our voyage, it was apparent that we looked forward to the beauty and uniqueness of the High Arctic of Svalbard. National Geographic Explorer features an open bridge policy, which was a great place for beautiful views anytime of the day. We visited the bridge often during the cruise. We were alerted at every polar bear sighting, even at 2am.

The name Spitsbergen means “jagged peaks” and is one of three inhabited islands in the archipelago. The largest settlement on Spitsbergen is the Norwegian town of Longyearbyen. We cruised into the large fjord system: Krossfjorden and its neighbor, Kongsfjorden.

We saw large fjords. Alpine in character, the area has very active glaciers and forks into many smaller fjords and bays. Warmed by the North Atlantic Drift, the waters of the west coast are relatively ice-free in summer, and temperatures are generally warmer than the icebound east coast. It is magnificent.

The Hinlopen Strait separates the two largest islands of the Svalbard archipelago. The cape is marked by high cliffs, which host one of the largest concentrations of nesting seabirds in Svalbard.

The geological setting of the cape is completely unique.

Today, the announcement was made our trip ashore was to be cancelled due to fog and poor visibility. However, we saw our first polar bear of the trip!

I raced to the bridge as the ship slowly and quietly approaches shoreline. The polar bear is majestic. It is not white, it is off-white and yellowish. Its huge paws are the size of dinner plates. It’s special to share the experience with others on board.

I am in awe. All ship passengers are warned to be silent.

Polar bears are marine mammals that weigh up to 2000 lbs. They are the largest land carnivores in the world, rivaled only by the Kodiak brown bears of southwestern Alaska. Polar bears sit at the top of the food chain in the biologically rich Arctic.

The most carnivorous of the bear species, polar bears feed primarily on the fat of ice-dependent seals. They are also known to eat walrus, beluga whale and bowhead whale carcasses, birds’ eggs, and (rarely) vegetation. Polar bears travel great distances in search of prey.

We saw a bear leap at a walrus only to be discouraged by its huge size and tusks. He retreated. The World Conservation Union (IUCN) estimates that there are between 20,000-25,000 polar bears in the world, of which 3,000 are in Longyearbyen. Polar bears are only found in the Arctic and can smell a seal up to 19 miles away. The most important habitats for polar bears are the edges of pack ice where currents and wind interact, forming a continually melting and refreezing matrix of ice patches. These are the areas where polar bears can find the greatest number of seals. They can walk around 4 miles an hour. They are highly dependent on older stable pack ice in the Arctic region, where they spend much of their time on the ice hunting, mating and denning. A polar bear can live up to 43 years.

The next morning we reached Moffen Island, a small island just to the North of Spitsbergen. The island sometimes has wildlife and is a protected area. The polar bears and walruses are the main attractions of the Arctic. It feels more like an African safari, as we “find” the wildlife and approach the animals very slowly and quietly so we do not scare them. We saw many large walruses floating on ice.
Walruses are the gentle giants of the Arctic. They are among the largest pinnipeds — fin-footed, semiaquatic marine mammals. However, while they have an intimidating size, and are carnivores, these animals are not aggressive. Walruses have large, flabby bodies covered in brown or pink skin. Short fur covers most of their bodies except for their fins. Their faces feature two small eyes, a mustache and two long tusks and it can weigh from 1,320 to 3,300 lbs.

The next morning National Geographic Explorer cruised further north and east, crossing 80 degree N as we approach the island of Phippsoya, located off the northwest coast of Nordaustlandet (North East Land). We hiked and walked, exploring the island along the shore with the guide. These islands are the most northerly points in the Svalbard Archipelago. Our guides have flares and a rifle in case a polar bear were to appear unexpectedly.

Seven Islands is a small archipelago situated north of Nordaustlandet. The largest island has a maximum elevation of 1,296 feet above sea level. It is more than 660 nautical miles north of Nordkapp, the northern tip of continental Norway. Bedrock of the Seven Islands archipelago comprises a series of deformed and metamorphosed granites and metasedimentary rocks that formed approximately 1,800 million years ago.

The wildlife seen here ranges from the black and white guillemots to puffins with orange feet and clown-like faces.

The guillemots are referred to as the ‘penguins of the north’. They are better at swimming than at flying and they too are dressed in tuxedos for a formal dinner.

The Far North is an area almost never explored by expedition vessels, especially at this time of year. We continue to follow an ice edge in the morning. In the afternoon, we travel back on the northern cost of Nordaustlandet. Our exact landing site was dependent on weather and ice conditions.

Last year, there was a block of solid ice from 8 to 10 feet. As we sailed further North, the look of despair on the captain’s face said it all. There were no blocks of frozen ice, evidence of global warming – heart breaking.
We entered Fuglefjorden, an area with stunning scenery and a beautiful glacier at the end of the fjord.
The conditions enabled us to explore the area in kayaks. We encountered a baby seal who was split from its mother. It swims close to our Zodiac, wanting interaction and to come aboard the boat.

The trip concludes with so many breathtaking moments at all times of the day. The views from the balcony are an incredible. The whale sightings are far too many to count.

Lindblad Expeditions’ Land of the Polar Bears journey was one for the books. I end this journey with a renewed commitment to protect the planet.

Majestic Scenery: So Close and Accessible

You may want to spread you wings and fly but find the everchanging rules difficult to manage. My recent trip to majestic Alaska, our 49th state, came with no... 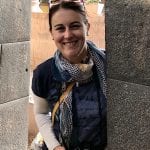 Pictures in the Galapagos

Nowadays, most of us all have smart phones. Do we take a lot of pictures with them when we travel?... 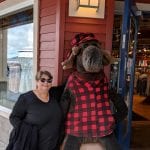 Alaska is enchanting and so refreshing that the minute I left the cruise ship I wanted to hop on and...