Heimaey - Island Exploration - HD Tour
After being picked up from your port you will be taken on a private guided coach tour of the island. Also included is a visit to the newly opened Volcano Musuem “Eldheimar”.

The Westman Islands are situated just off the south coast of Iceland. The main island, Heimaey, has a population of about 4,000. Head to the perfectly formed natural harbor area with its tall cliffs tenanted by multitudes of puffin, fulmar and guillemot. Both the birds & their eggs are extremely important factors in this community's prosperity. You will make a stop at “Sprangan”, a cliff where young islanders are taught the local sport of rope swinging. The sport has evolved from the islanders’ age old tradition of egg-collecting & to this day local men hop expertly from ledge to ledge collecting eggs attached to a lifeline held by an anchor man at the top of the cliff. The tour continues along the western part of the island, providing an opportunity to view the outer islands. The youngest of the group, “Surtsey”, having been born in the volcanic eruption of 1963. A stop at “Stórhöfdi” view point offers magnificent views over the island and majestic glaciers of mainland Iceland. During the tour you will drive between two volcanoes, the 5,000 year old Helgafell and the considerably younger Eldfell whose history is somewhat more recent..... At 2 am on the night of January 23rd 1973, a massive unexpected eruption began in the eastern part of Heimaey. Almost all of the 5,000 inhabitants were safely evacuated to the mainland whilst those that remained fought to save their town from the encroaching lava flows, constantly spraying the lava with cold seawater, causing some of it to solidify and much to be diverted, thus saving the harbour from destruction. During the tour you will visit the recently opened Eldheimar museum – an interactive exhibition that focuses on the 1973 volcanic eruption. The museum offers a glimpse into people’s lives on Heimaey before the event that would change their lives forever. Many of them lost their homes and all their all of their belongings, some never returned to Heimaey. The highlight of the exhibition is the house on Gerdisbraut 10, the home to Mrs. Gerdur Sigurðardóttir, Mr. Gudni Ólafsson and their 3 young children. With the youngest only just a few weeks old, they were forced to leave their home in the middle of the night taking with them only a bottle for the baby. A few days later their home had drowned in ash and lava. Gerdisbraut 10, after being buried in ash and lava for over 40 years, has now been excavated and shows how cruelly nature treated the homes of so many islanders.

Kindly note the running order of the sites visited may differ in line with local conditions. 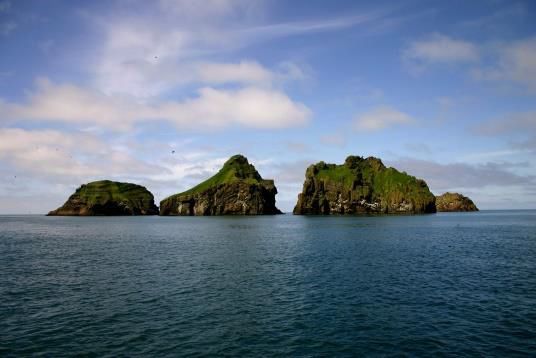